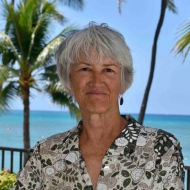 This user has not added any information to their profile yet.

Regional Governor, Slow Food Oahu
Oahu
https://instagram.com/lauriecarlson
Began my involvement with food during the 70s by volunteering, then managing Honolulu's only food coop. After that I attended business graduate school at Yale. I then founded and managed Honolulu Weekly, an alternative newspaper which covered arts, culture, politics, food and sustainability for more than twenty years. During that time I became involved with Slow Food, being one of the founding board members for Hawaii. I am now the SF Governor for the state. My latest activity for SF is Chinatown tours which cover food and history.