The Fish From Tip to Tail

Join us at one of our upcoming events

The Fish From Tip to Tail 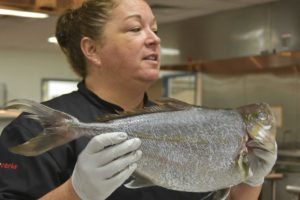 In this hands-on workshop, you will learn:

Meet at 7:30 at the Honolulu Fish Auction (1131 N. Nimitz Hwy., Honolulu, HI 96817) for our tour. Please wear closed-toed, non-slip shoes and bring a jacket. The Fish Auction tour is about 1.5 hours but may be adjusted as needed. All guests will receive a Fish ID pamphlet and an industry website card.  A fish poster is available for purchase for $25.00.

After the tour, we will regroup at the MW Restaurant Private Kitchen (1538 Kapiolani Blvd., #107, Honolulu, HI 96814) at approximately 9:00-9:30AM. Here, each participant will have an opportunity to fillet a fish and create their own bake en papillote.  We will all sit down and share our baked fish afterwards.  Coffee, tea and lemonade will be available.

About Chef Jackie Lau: Jackie Lau is the former corporate chef for Roy Yamaguchi, who she began working for a few weeks after he opened his original Roy’s Restaurant in Honolulu in late 1988. Beginning as a pastry chef, she quietly became adept at all phases of Roy’s Kitchen operation, rising to the position of Yamaguchi’s first Chef de Cuisine. So impressed was Chef Yamaguchi that he sent Jacqueline to Japan as the opening chef for his first international restaurant, Roy’s Tokyo. This was the beginning of her culinary adventure. She traveled the world with Chef Yamaguchi, working side by side with him at many of the country’s top culinary events, and opening his restaurants in Hawaii, abroad and on the mainland. Jackie was Executive Chef at Roy’s Original Honolulu restaurant, Roy’s Nicolina, Roy’s Waikoloa and Corporate Chef for Roy’s Hawaii restaurants for sixteen years. In the twenty-seven years with Roy’s, she opened over a dozen restaurants and organized many of the restaurants special events.

Jacqueline has participated in many outstanding culinary events across the country and abroad, including events for the Hawaii Visitors and Convention Bureau, Sagebrush Classic, Aspen Food and Wine Festival, The James Beard House, Great American Seafood Challenge and The World Gourmet Summit. Jacqueline has been featured in several television series including: The Great Chef Series (Great Chefs of Hawaii and Great Chefs of the World), Hawaii Cooks with Roy Yamaguchi and Island Chefs.  She has also been recognized in Hawaii Business as one of the leading women chefs in Hawaii.  She is also active with speaking at the public schools both at elementary and high school levels regarding culinary field.

Jacqueline has also been the chief organizer for many events in the state of Hawaii and on the Mainland.  Most recently she was also the Executive Chef for The Hawaii Food and Wine Festival and has been since its inception five years ago.  Responsible for organizing over a 100 world renowned chefs’ culinary needs, with an emphasis on utilizing local Hawaii products for the guest chefs to feature in the menus during the festival.